A story bigger than Stormy Daniels

The media is missing the story that actually impacts Ohio families.

The Stormy Daniels media hurricane has swept through Ohio and has since left the state. While the media may have moved onto other stories, I’m still in a little shock over the whole situation.

The CDA was passed in 2007 and regulates the hoursstrip clubs can be open,and prohibits performers from touching patrons. The law is as needed today as it was when it was passed more than a decade ago. As my predecessor Phil Burresspointed out at the time, studies continue to showthe strip clubs are hubs for human trafficking.

The Columbus Police eventually dropped the charges against Stormy Daniels. Since then, there are two things from this story that I cannot get over.

The Human Trafficking Ring in Columbus
What was lost in all the media hype was in the first press release from the Columbus Police they announced that the undercover cops at the club were not there for Stormy Daniels’ performance, but were there as a part of an ongoing long-term investigation into human trafficking in central Ohio. 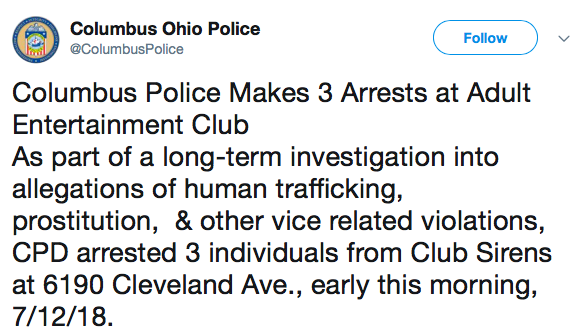 Ohio is ranked fourth in the nation for human trafficking– a devastating statistic. So while Stormy Daniels getting arrested in central Ohio makes for a juicy story, this really doesn’t impact the lives of central Ohioans. The fact that there’s an ongoing investigation into human trafficking in Columbus is much more relevant.

Columbus City Attorney Zach Klein isn’t taking Human Trafficking Seriously Enough
Soon after charges were dropped against Stormy Daniels, Columbus City Attorney Zach Klein announced that he would no longer prosecute violators of the Community Defense Act, making absurd claims that the law was vague. But the CDA has been on the books for more than 10 years, and it wasn’t until it became politically popular in liberal circles that Zach Klein decided he wasn’t going to enforce the law.

What I can tell you is that if Zach Klein won’t enforce this very good, and very enforceable law, CCV is more than happy to go back to the General Assembly to find other ways we can fight the exploitation of women and human trafficking that happens in strip clubs all throughout Ohio.